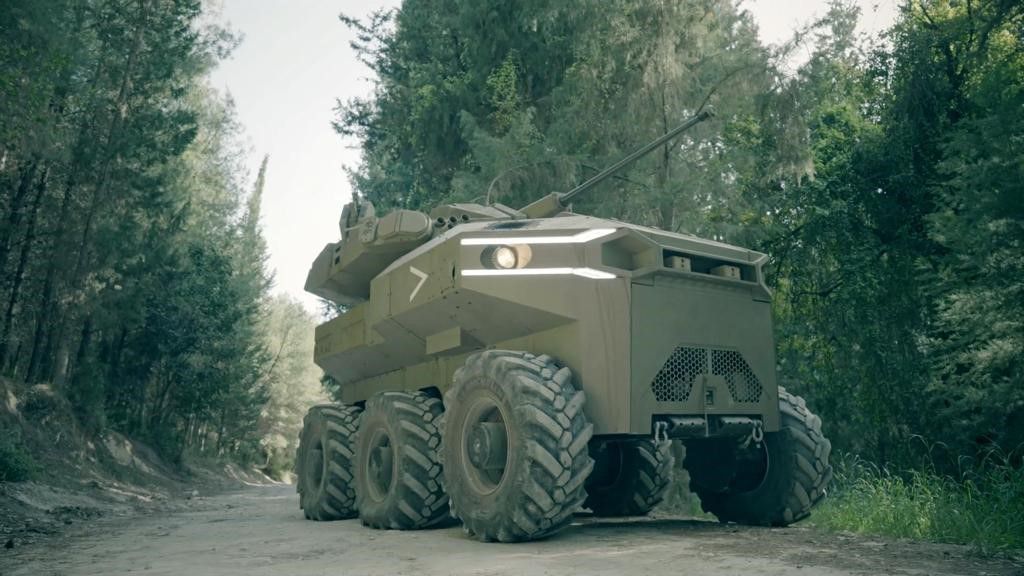 JERUSALEM — Israel will next year begin testing an unmanned combat vehicle armed with a 30mm autonomous turret, the Defense Ministry announced Monday in a news release.

The unveiling of the Medium Robotic Combat Vehicle comes in the wake of Israel announcing it is acquiring the Negeva combat vehicle for its special forces from Israel Aerospace Industries, and as the country takes delivery of the first Eitan armored personnel carrier for its Nahal brigade. The acquisitions are part of Israel’s focus on artificial intelligence and other autonomous technologies.

The M-RCV, shown off by Elbit Systems at the Eurosatory defense expo in Paris this week, is based on the BLR-2 unmanned ground vehicle made by Israeli firm BL. The turret was developed by the Tank and APC Directorate, which falls under the purview of the ministry’s Directorate of Defense Research and Development. The weapon is already in use on the country’s new Eitan armored personnel carrier.

The robotic vehicle also incorporates a “number of cutting-edge technologies including advanced maneuvering capabilities, the ability to carry heavy and varied mission loads, and a built-in system for transporting and receiving UAVs,” the ministry added.

Some of the technological features hail from Israel’s other two major defense companies, including a missile launcher by Israel Aerospace Industries and Spike missiles by Rafael Advanced Defense Systems. Rafael recently unveiled a sixth-generation non-line-of-sight Spike variant, but it’s unclear what Spike type will arm the M-RCV.

The new vehicle is supposed to be able to operate in reconnaissance operations and in all-terrain conditions, the ministry statement read, and during the night and day. “The system was developed as part of the autonomous battlefield concept led in the DDR&D in collaboration with the Tank and APC Directorate while implementing an open architecture for integrating future capabilities and integrating the robot alongside other tools and capabilities.”

Elbit, IAI, Rafael and the ministry did not provide further details of the M-RCV project as of press time.

A video of the new vehicle from the ministry describes it as a robust and lethal platform with multipurpose abilities. The video shows the M-RCV driving through fields and on dirt roads, as well as using its gun with automatic target recognition, featuring the ability to track multiple targets and prioritize them.

The video also shows the unmanned system launching a UAV using a robotic arm, and incorporating autonomous driving with artificial intelligence and scene-matching technology for route planning. This enables the vehicle to detect obstacles and take detours, for instance.

The BL platform on which the M-RCV is based is a six-wheel drive system. The company says the BLR is an “ongoing development project, for an unmanned ground vehicle. The BLR offers extreme ground mobility, coupled with ‘drive by wire’ technology, giving mission control the ability to control the vehicle in a loose control circuit.”

Before its unveiling, a defense blog identified the BLR-2 being transported on a road in a picture posted to Twitter on May 3. Defense News was unable to independently verify the photo’s authenticity.

Israel has used unmanned ground vehicles before. In 2012, the country said it was using the Guardium UGV to patrol the fence between Israel and the Gaza Strip. In 2019, Elbit demonstrated an armored fighting vehicle that could be operated from a helmet-mounted display, noting at the time that these and other capabilities were part of a technology demonstrator that included a “Pioneer fighting Unmanned Ground Vehicle.” The turret on the vehicle was a 30mm gun.

IAI unveiled the Rex MK II at the DSEI defense trade show in London in 2021. The vehicle has four wheels and can carry a 7.62mm gun. The Israel Defense Forces already use the company’s six-wheeled Jaguar.

In November 2021, Elbit Systems and Roboteam announced Rook, a six-wheeled UGV that uses Elbit’s Torch-X Robotics and Autonomous System. France, the U.K., Israel and the U.S. use the Torch-X system. At Eurosatory this week, Elbit showcased a new electro-optical payload called Copas-L, which was integrated on a UGV at the Roboteam exhibit.

Seth Frantzman is the Israel correspondent for Defense News. He has been covering conflict in the Middle East since 2010. He has experience covering the international coalition against the Islamic State group in Iraq and Syria, and he is a co-founder and executive director of the Middle East Center for Reporting and Analysis.