Harpoons for Ukraine: Anti-Ship Missiles on the Way to Fight Russia


Harpoons and Other Weapons Headed to Ukraine – U.S. lawmakers have approved an additional $1 billion military aid package for Ukraine that will include more long-range artillery, and notably Harpoon anti-ship missile systems. The White House announced the deal on Wednesday afternoon after President Joe Biden spoke with Ukrainian President Volodymyr Zelenskyy earlier in the day.

Biden reaffirmed the United States’ support, and promised to “stand by Ukraine as it defends its democracy and support its sovereignty and territorial integrity in the face of unprovoked Russian aggression.”

According to the United States Department of Defense (DoD), the package will include eighteen 155mm Howitzers, 36,000 rounds of 155mm ammunition, eighteen tactical vehicles to tow the Howitzers, as well as additional ammunition for High Mobility Artillery Rocket Systems (HIMARS), and four tactical vehicles to recover equipment. Spare parts and other equipment – including thousands of secure radios; thousands of night vision devices, thermal sights, and other optics – along with funding for training, maintenance, sustainment, transportation, and administrative costs are also part of the foreign aid package.

Included are two subsonic RGM-84 Harpoon coastal defense systems, and those will be added to Ukraine’s already impressive arsenal of shore-based anti-ship launchers that Denmark had supplied to Ukraine last month.

However, the weapons aren’t being sent to counter any pending amphibious invasion.

“The provision of [the] Harpoon is not in response to any particular piece of new information,” a DoD official said via a statement. “It’s a combination of continued consultation with the Ukrainians, and coastal defense still being near the top of their urgent requirements list.”

It has also been reported that though the U.S. is providing the two launchers, the actual missiles and vehicles to move them could be provided to other nations. Senior defense officials have carefully avoided saying which countries might be supplying the actual missiles.

What is also notable about the Boeing-made Harpoons is that those systems won’t come with the same kind of restrictions placed on the HIMARS – which the Biden Administration has directly instructed Ukraine not to use to strike Russian territory over fears that it could lead to escalation of the conflict.

However, some U.S. lawmakers have called for the U.S. to be more aggressive in what military aid is being sent.

“When it comes to drones and when it comes to long-range artillery, we’ve been too cautious,” said House Armed Services Committee Chairman Adam Smith (D-Wash.) on Thursday while speaking at the Center for a New American Security.

“And I don’t agree with the president’s take that we can’t give the Ukrainians anything capable of striking Russia,” Smith continued. “Ukraine borders Russia. If you give them a mortar shell that can go a mile, theoretically it can strike Russia. The issue is, if the Russians are able to see better and shoot further, then you’re at a disadvantage. So, I think we should give them more of that.”

Even as the Harpoons don’t have any restrictions on how they may be used, some U.S. officials have suggested it would likely be in a more defensive nature.

“The Harpoon is intended for coastal defense,” a defense official told Politico. “We’ve seen the negative impacts the Russian blockade has had, and continued … Ukrainian fears about Russia targeting Odessa and other critical ports around the Black Sea. So this is a capability that provides them significantly stronger deterrence.”

Of course, any Russian warship that comes within range of the Harpoon could rightfully be seen as a threat and targeted. Already, Ukraine has scored some notable successes in striking at Russian warship – and in April, even sunk the Russian Navy’s Black Sea Fleet flagship Moskva. Once Ukraine is armed with the Harpoons, Russia may think twice about sailing anywhere near the unoccupied Ukraine coastline.

Originally developed by McDonnell Douglas – now part of Boeing – for the U.S. Navy, the all-weather, over-the-horizon, anti-ship Harpoon missile system has a low-level, sea-skimming cruise trajectory with active radar guidance. The Harpoon is capable of executing both land-strike and anti-ship missions. To strike targets on land and ships in port, the missile uses GPS-aided inertial navigation to hit a designated target aimpoint. 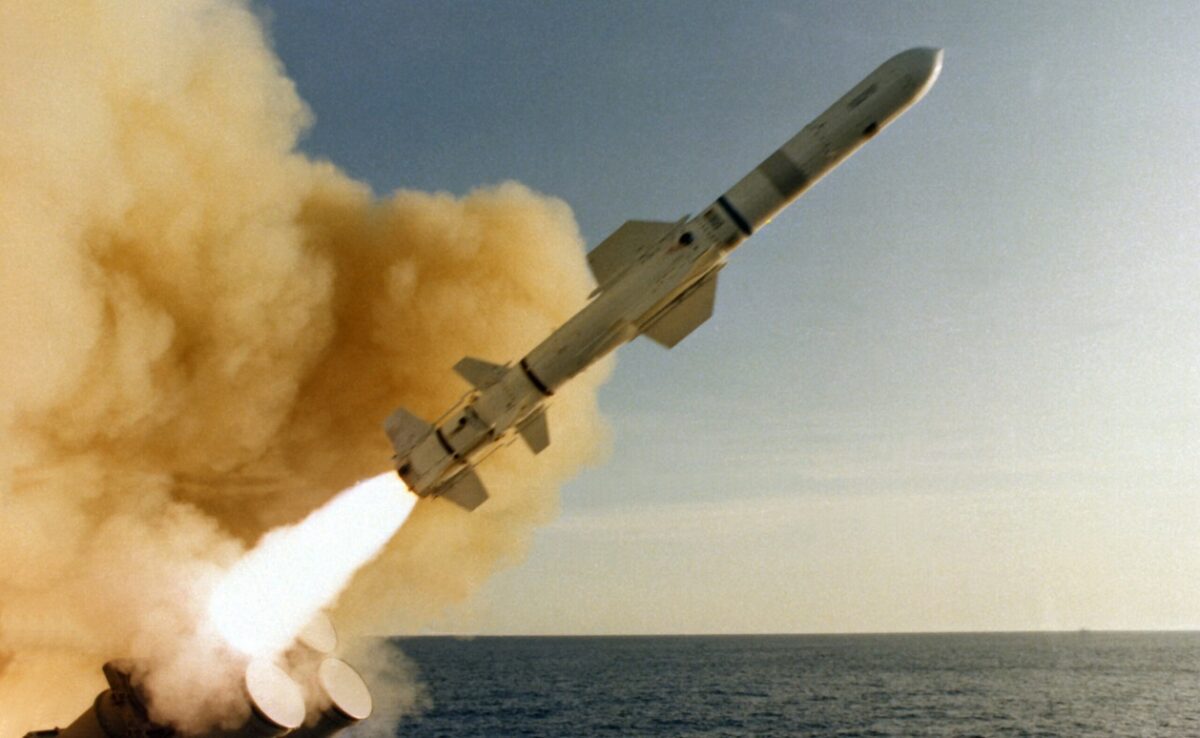 A view of an RGM-84 surface-to-surface Harpoon missile, immediately after leaving a canister launcher aboard the cruiser USS LEAHY (CG-16), near the Pacific Missile Test Center, Calif.

It is considered to be among the world’s most successful anti-ship missiles and is currently in service with the armed forces of more than 30 countries.

The Harpoon has been upgraded over the years and is now available as the Harpoon Block II. It also led to the development of the standoff land attack missile (SLAM) and subsequently the SLAM expanded response (SLAM-ER).

Now a Senior Editor for 1945, Peter Suciu is a Michigan-based writer who has contributed to more than four dozen magazines, newspapers and websites. He regularly writes about military hardware, firearms history, cybersecurity and international affairs. Peter is also a Contributing Writer for Forbes.