(May 24, 2022 / JNS) On any given day, the Israel Defense Forces report the result of its latest counter-terrorism raid in the West Bank, and more often than not, it is not only wanted security suspects that are captured but also illegal firearms.

This trend is part of a growing focus by the IDF to significantly disrupt both the illegal weapons trade and the local gun-manufacturing industry in the West Bank. The military has told JNS that its ability to meet this objective is improving.

Illegal firearms that plague both the West Bank and inside the Arab-Israeli sector within the State of Israel’s borders have a range of sources. Illegal Palestinian workshops in the West Bank produce locally made “Carlo” submachine guns. Thefts of assault rifles from IDF bases have been an ongoing challenge. Other guns and explosives are smuggled into the area—both from Jordan by arms smugglers, and from Lebanon, where Hezbollah has set up an extensive arms-smuggling network that relies on cooperation from Israeli-Arab criminal elements inside Israel.

Security forces, however, are determined to put a major dent in all of these activities.

On Tuesday, the IDF, together with the Border Police and the Shin Bet intelligence agency, announced counter-terrorism raids near the Jenin Refugee Camp, which in recent months has become a hotbed of terrorist activity and the launchpad of some of the worst atrocities committed against Israeli civilians during the current wave of violence, including the shooting and ax attacks in Elad, Tel Aviv and Bnei Brak.

The raids themselves often encounter Palestinian gunmen who open fire at Israeli security forces, who then return fire, frequently striking the assailants, as occurred on Tuesday morning’s raid. The operation resulted in the arrest of a wanted suspect and the seizure of two M16 rifles, alongside a stolen IDF military vest found in the residence of the suspect.

On May 15, security forces conducted a series of security raids in the West Bank, which included gun seizures in Beit Ummar, north of Hebron, as well as arrests. Such raids are directly fueled by the Shin Bet’s intelligence.

“Israeli security forces are operating as part of counter-terrorism activities to locate and confiscate illegal munitions in a variety of ways,” the IDF Spokesperson Unit told JNS in a statement. “The IDF is improving its capabilities and intensifying activities against illegal weapons. These activities included targeting smuggling routes, arms dealers and workshops used to manufacture illegal weapons,” it added.

The military vowed in its statement to continue acting against terrorism and to maintain the security of Israel’s residents while working to prevent harm to uninvolved civilians. In its statement, the IDF said that Palestinian terror activity “is greatly supported by the illegal weapons industry in Judea and Samaria.” 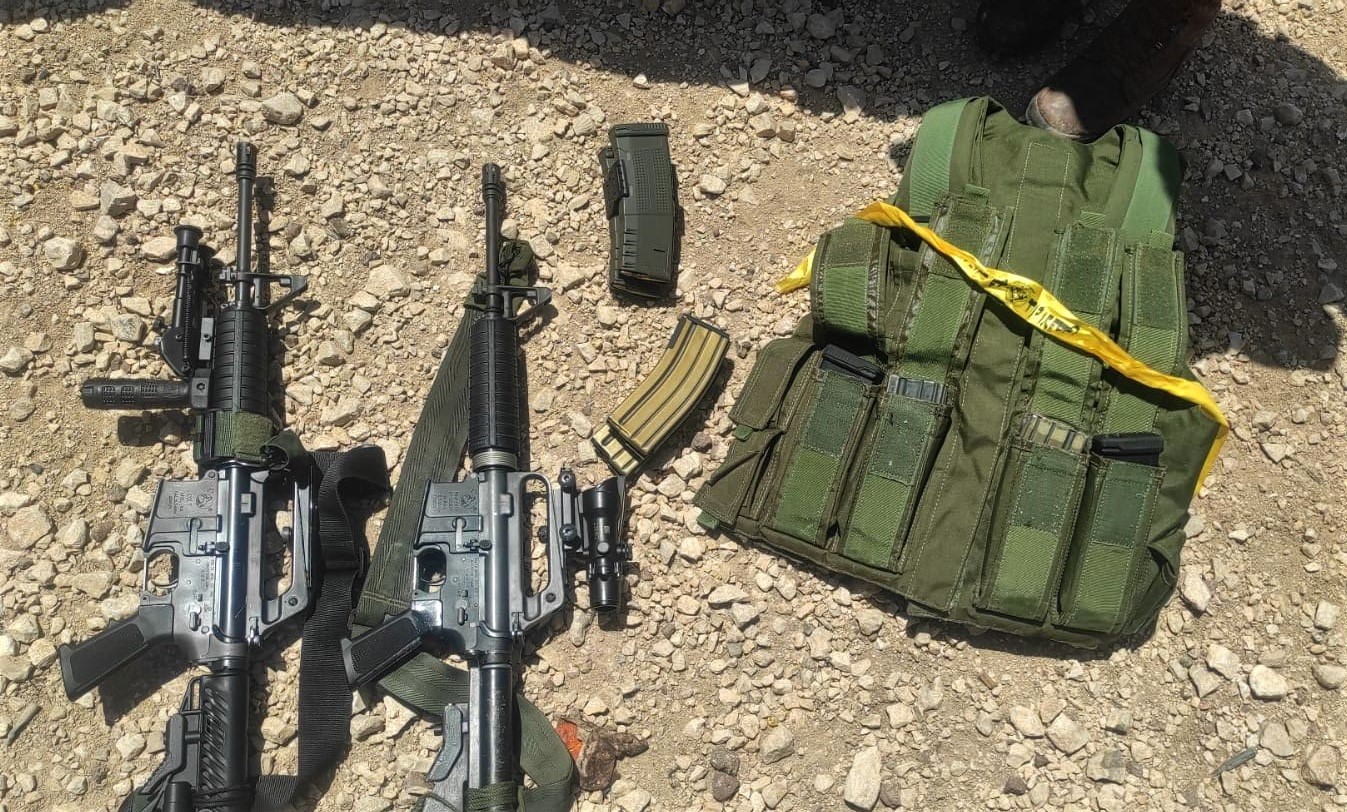 Firearms seized by the Israel Defense Forces during a counter-terrorism raid in May 2022. Credit: IDF Spokesperson’s Unit.

On the other side of the Green Line, the Israel Police has been engaged in intensive efforts to tackle the firearms and shooting attack spree that has afflicted the Arab-Israeli community.

According to the Abraham Initiatives NGO, the Arab-Israeli sector saw its most deadly year in 2021, with 126 homicide records. Civilians, including children, have been killed in cross-fire between criminal gangs. A downwards trend in the levels of such shootings was recorded in the first quarter of 2022.

This proliferation of firearms also poses a direct security threat since the guns can and have fallen into the hands of terrorists, demonstrated by the March 27 terror attack by two ISIS-affiliated Arab Israeli gunmen, which murdered two Israelis and injured 12.

“The Israel Police is focusing its operations to stop the proliferation of firearms and shooting offenses in communities in the Arab-Israeli sector, and it is conducting daily and hourly operations, investing forces, technology and great efforts,” police told JNS in a statement.

According to figures shared by a police spokesperson, in 2021, the Israel Police captured thousands of firearms, including 1,061 handguns, 265 submachine guns, 727 grenades of various types and 613 rifles of various types.

When it comes to cross-border smuggling, both IDF lookouts and the police’s elite Borders Unit cooperate in detecting and foiling these.

On April 25, for example, the police’s Northern District received an alert from an IDF lookout post about suspicious movements near the Lebanese border. Police seized a bag containing 100 fragmentation grenades (and two firearms), an enormous amount of explosive power that security forces said was designated for a terror attack inside of Israel, likely orchestrated by Hezbollah.

According to police, Hezbollah obtains the weapons, smuggles them into Israel and then criminals in Israel receive some for themselves while seeking to transfer others to terrorists.

This was the first time that fragmentation grenades were caught on the northern border.

The Israel Police’s Borders Unit is active on the borders with Lebanon, Syria and Jordan on the lookout and conducting ambushes for smugglers. Between January and April this year, the unit seized 148 handguns, 23 assault rifles and illegal narcotics worth millions of shekels.

“The Israel Police will continue in its determined and uncompromising struggle against weapons offenses—all for the goal of preventing crime and terrorism, preserving public safety, and enabling a proper and secure routine for all Israeli civilians,” it said.