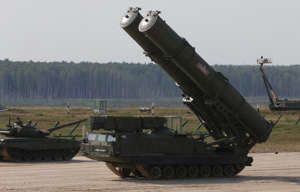 © Contributor/Getty Images
In this photo, an S-300 missile operates during a show in Moscow on August 17, 2022. Russia has allegedly been moving anti-aircraft missiles, potentially including this missile, from bases near St. Petersburg to use in Ukraine, according to a new report.


Russia is allegedly emptying a crucial air defense base to resupply forces in Ukraine amid mounting losses, according to satellite images reported by Finnish news agency Yleisradio Oy on Sunday.

Russian President Vladimir Putin ordered his invasion of Ukraine on February 24, hoping for a quick victory against his Eastern European neighbor. Ukraine, however, met Putin’s troops with a stronger-than-anticipated defense that has since been bolstered by Western military aid.

Russia has suffered significant equipment losses amid the war, forcing them to turn to older weapons such as Soviet-era anti-aircraft missiles. Ukraine has claimed to have destroyed a large number of Russian weapons, including 2,212 tanks, 1,313 artillery systems and 251 aircraft, according to its defense ministry—though these claims could not be independently verified.

The news agency obtained satellite images from August and September indicating that at least four of the 14 anti-aircraft missile bases that surround St. Petersburg have been emptied of equipment.

It is not known exactly when the equipment was moved, but Finnish military expert Marko Eklund told Yle that missile containers were seen being loaded onto transport platforms in May along the shore of Lake Ladoga.

These bases play a key role in the defense of St. Petersburg, Russia’s second-largest city that is home to more than 5 million people and also serves as a major commercial and cultural hub. The anti-aircraft missiles in these bases are positioned to shoot down any aircraft, missiles or helicopters in the case of an attack.

This means they are less powerful than the other missiles that can be in these bases, and Eklund told Yle that their removal likely will not impact the city’s defense efforts.

However, older missiles may boost Russia’s efforts in Ukraine, where Putin’s troops have already been using Soviet-era anti-aircraft missiles throughout the “special military operation.”

In July, Kremlin forces conducted six air strikes on Mykolaiv, a city in southern Ukraine, using S-300 missiles. Another strike on a Kremenchuk shopping center in June that killed 20 people was attributed to Kh-32 missiles, which originated in the 1990s.

Russia has reportedly updated the Soviet-era equipment with GPS technology, which allows them to attack more specific targets, Newsweek reported in July. Intelligence warned, however, that the use of these older weapons are still likely to result in innocent civilian deaths.

Newsweek reached out to the Russian Ministry of Defense for comment.

USS Zumwalt: US Navy sends its most advanced surface warship to east Asia

Analysis: The war in Ukraine is at a dangerous tipping point