Ukraine’s President Volodymyr Zelensky praised Israel’s High Court Sunday after it rejected a government cap on the number of Ukrainian refugees fleeing the war who are allowed to enter the country.

The court on Sunday said Interior Minister Ayelet Shaked could not restrict the number of non-Jewish refugees fleeing the Russian war to just 5,000, rejecting the reasoning behind the policy.

“The rule of law and respect for human rights is exactly what distinguishes a true, developed democracy!” Zelensky said on Twitter shortly after the ruling.

“I commend the decision of the Supreme Court of the State of Israel, which obliges the government of [Israel] to abolish any additional restrictions on the entry of citizens of [Ukraine],” he added.

Thousands of Ukrainians have come to Israel in the wake of Russia’s February invasion of their country.

Under existing regulations, Ukrainians do not need a visa for a visit of up to three months in Israel. In March, Shaked said Israel would allow some 20,000 Ukrainians who were on tourist visas or in the country illegally before the Russian invasion to remain.

She also said Israel grant would visas to a further 5,000 refugees who do not automatically qualify for immigration to Israel under the Law of Return, which allows anyone who has a Jewish parent or grandparent to receive Israeli citizenship. 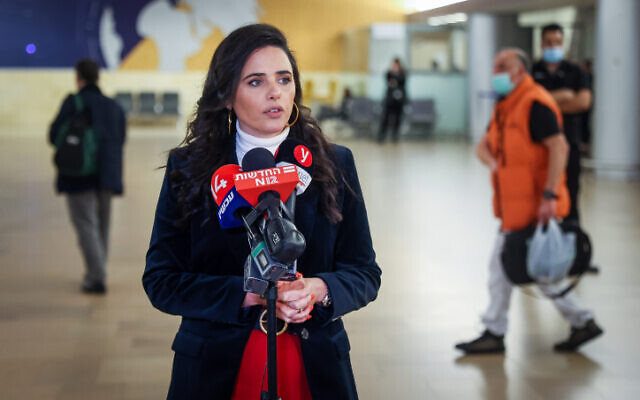 Shaked also introduced a requirement that Ukrainians fill in an online application form before even leaving their home and heading to Israel.

The state had claimed the cap was necessary because those 20,000 would be assumed to remain in the country beyond the length of the tourist visa. However, the court ruling pointed to figures showing that 4,409 Ukrainians who entered Israel since the war broke out in February had left by May 8.

Shaked slammed Sunday’s ruling, arguing that her policy has been “proven to be a success,” enabling relatives of Israelis to arrive and work, while “preventing an unprecedented flooding [of refugees].”

“In recent weeks, thanks to this system, more Ukrainians are leaving the country than arriving,” she said in a statement.

“Unfortunately, the High Court has ruled, practicing extraordinary judicial activism, that this system will be halted if it isn’t discussed in the Knesset,” she added, referring to the court’s ruling that any change in the visa agreement requires the involvement of parliamentary committees.

Shaked, who has long been in vocal in her criticism of the top court, said she called a meeting of the Knesset Internal Affairs Committee to discuss the matter.

“It is clear that we can’t allow the unlimited entry of foreign citizens, while we don’t know whether and when they are going to exit,” she said.

The court’s ruling “embodies our moral duty as a Jewish nation and state,” he said.

“From the very beginning, I have fought to allow the entry of Ukrainian refugees without the strains of bureaucratic barriers. I welcome this decision made in favor of humanity and in line with our ethos as a people,” Shai said in a statement.

Shaked has long campaigned for stricter immigration policies toward non-Jewish asylum-seekers, which she says are needed to preserve the state’s Jewish character.

Her quota, which was filled almost immediately after it was announced, drew fire from both within the coalition and outside Israel, as Israel was criticized for seemingly refusing to help the masses of Ukrainian refugees fleeing a Russian onslaught.

It also drew fierce criticism from Ukraine, which said it flouted the visa agreement between the two countries.

The petition was filed by the Tomer Warsha law firm, which specializes in immigration law, and which has been helping Ukrainians enter the country. 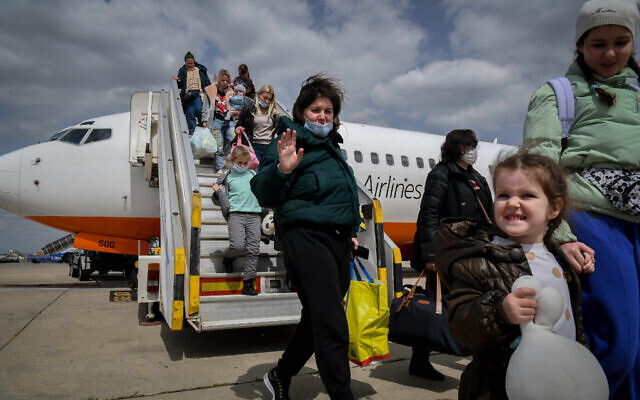 Ukrainians who fled the fighting in Ukraine land at Ben Gurion Airport outside Tel Aviv on March 17, 2022. (Yossi Zeliger/Flash90)

“We are very satisfied that the High Court accepted our claims and ruled that the interior minister acted against the provisions of the law. We are happy that Ukrainian citizens, who are still in the war, can find quiet in Israel alongside their family and friends,” Warsha said in a statement.

“It is important to make clear that from now on there is no more Shaked framework, there is no limit of only 5,000 people, there is no need to fill in an online form,” he added.

I commend the decision of the Supreme Court of the State of Israel, which obliges the government of ???????? to abolish any additional restrictions on the entry of citizens of ????????. The rule of law and respect for human rights is exactly what distinguishes a true, developed democracy!

Warsha told Army Radio on Sunday afternoon that he has represented refugee interests for decades and that this was the first time he’d gotten presidential praise for his efforts. He said he particularly appreciated the support from Zelensky, who spoke out on the day of the decision, even in the midst of the war.

According to the court, the ruling does not affect the interior minister’s authority to decide who can enter the country, according to the provisions of the law, or her right to refuse Ukrainian citizens entry into the country on an individual basis at her discretion.

We’re really pleased that you’ve read X Times of Israel articles in the past month.

That’s why we started the Times of Israel ten years ago – to provide discerning readers like you with must-read coverage of Israel and the Jewish world.

So now we have a request. Unlike other news outlets, we haven’t put up a paywall. But as the journalism we do is costly, we invite readers for whom The Times of Israel has become important to help support our work by joining The Times of Israel Community.

For as little as $6 a month you can help support our quality journalism while enjoying The Times of Israel AD-FREE, as well as accessing exclusive content available only to Times of Israel Community members.

Thank you,
David Horovitz, Founding Editor of The Times of Israel

Already a member? Sign in to stop seeing this