Where have Ukrainian refugees gone? 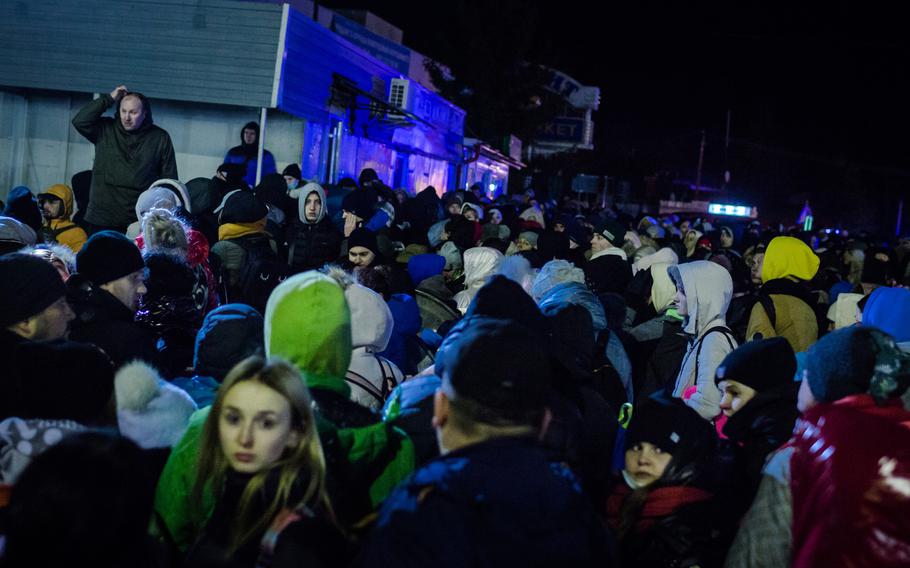 Ukrainians fleeing the Russian invasion wait at the Medyka crossing, at the border with Poland, in Shehyni, Ukraine, on Feb. 25, 2022. (Wojciech Grzedzinski/The Washington Post)

They packed into trains bound for Poland. Drove through the night to Romania. Pushed strollers to the safety of Slovakia.

Despite the large numbers, the continent responded with a speed — and generosity — that was a sharp contrast with other recent influxes.

In the first week of war, roughly a million people, mostly women and children, escaped to the E.U., according to the U.N. High Commissioner for Refugees (UNHCR). Most went to neighboring countries. In Poland, 547,000 Ukrainians arrived in just one week; volunteers rushed to the border to offer them food, shelter and support. Hungary, which built razor-wire fences during the last migration crisis, welcomed 133,000 Ukrainians in the same period.

On March 3, the E.U. enacted the Temporary Protection Directive, granting those men, women and children the right to live, work and access social services in the bloc for at least a year, potentially more, though previous waves of newcomers, including from the Middle East and Africa in 2015, were not offered the same protections.

“All those fleeing [Vladimir] Putin’s bombs are welcome in Europe,” European Commission President Ursula von der Leyen declared, referring to the Russian president. “We will provide protection to those seeking shelter, and we will help those looking for a safe way home.”

Four months into Russia’s invasion, 5.2 million refugees from Ukraine were recorded across Europe, one of the biggest mass displacements since World War II. By mid-June, 3.2 million had been granted temporary protection in the E.U.

The latest data does not provide a complete picture on the refugees’ whereabouts, because some have not registered with national authorities, or have not yet been approved. People who started off in one country may now be in another. Some have gone back to Ukraine.

But the numbers do give a sense of where displaced people plan to stay for now.

As in the war’s early days, most people have opted to remain closer to home in central and eastern European countries. Those decisions will likely shape future E.U. debates over migration, as certain countries seek more funding and support for services, including schools.

Central and eastern Europe are hosting a disproportionate share of newcomers compared with relatively wealthy Western Europe. In the Czech Republic, those registered for temporary protection now account for 3.5% of the population.

Seven years ago, Europe was confronted by another wave of newcomers that included Syrians fleeing a brutal war as well refugees and migrants from South Asia, the Middle East and elsewhere.

There is no precise way to compare what happened in 2015 and 2016 to what is happening now, because temporary protection has not been used in the E.U. before. However, refugee and asylum numbers offer a sense of how much larger and faster this wave is. Poland was hesitant to accept refugees during the last crisis, but has already welcomed 1.18 million people who left Ukraine. Germany, one of the most receptive countries last time, has received 780,000 refugees from Ukraine so far, 40% of the number of refugees and asylum seekers it received in 2015 and 2016 combined.

The aftermath of the earlier exodus is still felt in Europe. After a warm welcome initially from Germany, with then-Chancellor Angela Merkel promising “We can do this!,” much of the E.U. decided it would not. Since then, a far-right backlash has fueled efforts to block asylum seekers.

Europe did not invoke temporary protection seven years ago, leaving many in limbo for years while their asylum cases were assessed.

As the war drags on, questions about how the bloc will share the cost of supporting newcomers will probably get more complicated. Margaritis Schinas, vice president of the European Commission, told The Washington Post last month that he expects “at least 2.5 million to 3 million” Ukrainian refugees will stay in the bloc.

What happens next will be closely watched for ideas on how to handle displacement on a massive scale. The lesson so far, said Shabia Mantoo, a UNHCR spokesperson: “If we can do this with millions of refugees who are fleeing in a short amount of time, then this can be done elsewhere.”

Sources: UNHCR data on temporary protection was reported from June 5 to 15. Because no official refugee numbers were available for Poland, Hungary and Greece, the count for these countries is an estimate calculated by the sum of registrations for temporary protection and the number of asylum claims from refugees from Ukraine.