Who is in NATO and how does the alliance work, explained


The Polish government confirmed two people were killed in the explosion, but has not verified the missiles‘ country of origin.

Both sides in the conflict have used Russian-made munitions in the past.

Polish Prime Minister Mateusz Morawiecki’s government is now verifying whether there are grounds to trigger Article Five of the NATO treaty.

Article Five states that if a NATO member has been attacked, each and every other member of the alliance will consider the act as an assault against all members, who will then take all measures necessary to assist.

If Article Five is invoked, it ﻿could have serious repercussions.

Here are all the NATO countries ﻿currently a part of the alliance and their roles.

NATO is a European and North American defence alliance set up to promote peace and stability and to safeguard the security of its members. It was created in 1949 as the Cold War escalated and is headquartered in Brussels, Belgium.

Its aim was to provide collective security against the Soviet Union and Eastern Europe’s communist-run countries.

Russia reacted by setting up its own military alliance called the Warsaw Pact.

What countries are involved?

They are made up of 12 founding members: Belgium, Canada, Denmark, France, Iceland, Italy, Luxembourg, the Netherlands, Norway, Portugal, the United Kingdom and the United States.

The alliance’s meetings — the North Atlantic Council, held at ambassadorial level almost weekly in Brussels, less often at the level of ministers or heads of state and government — are chaired by NATO Secretary-General Jens Stoltenberg, a Norwegian politician.

But the US is without doubt the biggest and most influential member. It spends more on its own military budget than all the others combined. It also pays just over 22 per cent of NATO common funding for infrastructure and collectively owned equipment. So Washington has a big say in how things are run.

In essence, Stoltenberg runs the headquarters located near Brussels.

He doesn’t order the allies around. His job is to encourage consensus and speak on their behalf publicly as a single voice representing all 30 members.

Why does NATO worry Russia?

The stated reason is that a further eastward expansion of NATO would pose a security threat to Russia. Washington and its allies have long denied this is a valid worry, since no NATO country is threatening to use force against Russia.

More broadly, Putin wants NATO to pull back its existing military presence in Eastern Europe, which includes a regularly rotating series of exercises in Lithuania, Latvia and Estonia, all former Soviet states.

Putin also opposes NATO’s missile defence presence in Romania, a former Soviet satellite state, and a similar base under development in Poland, saying they could be converted to offensive weapons capable of threatening Russia. 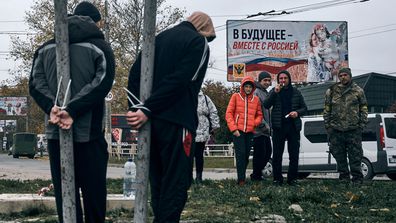 ‘Ukraine Has Already Won’ In War With Russia

To Keep The Trauma At Bay, Ukrainian Refugee Children Are Given More Time To Play